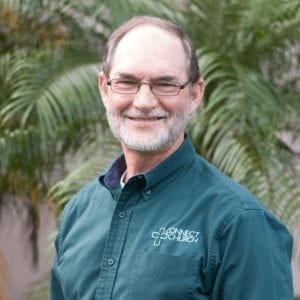 Dale was born and raised in East Texas. He first came to South Florida in 1976 as a serviceman of the United States Air Force. Stationed at Homestead Air Force Base, he joined a local church where he met his future wife, Alinda.

After receiving an undergraduate degree in Business from Sam Houston State University, Dale dedicated his life to full-time vocational ministry. He began serving as Pastor of Connect Church while it was still a mission in 1993 and received his Doctor of Ministry degree from Liberty Theological Seminary in 2009.

He and Alinda share a passion for ministering to the families of the Western Communities. They have one son, Dr. Kyle Faircloth, who serves as an Inter-Cultural Professor at Palm Beach Atlantic University. Kyle and his wife Christine, have a son, Micah and daughter, Kyla Ann. Pastor Dale and Alinda are very happy to be grandparents. He is also a huge sports fan and enjoys spending downtime in his workshop.